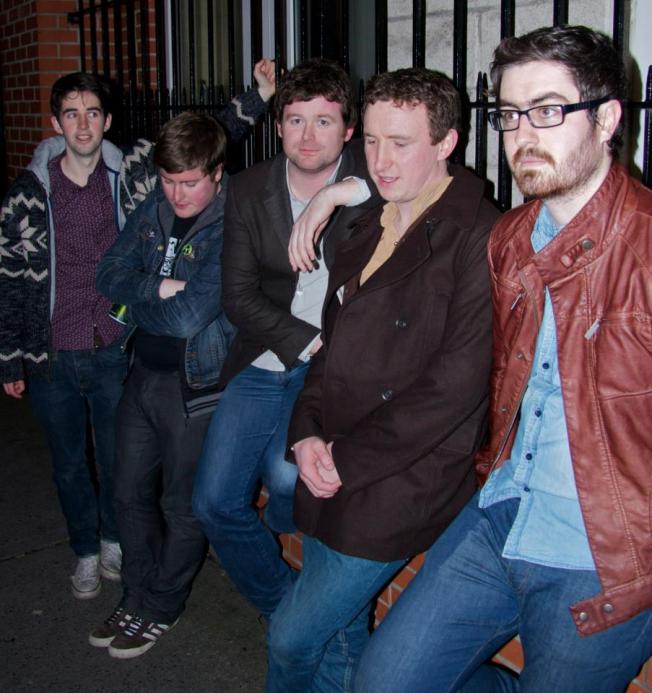 Competitions and giveaways are a rare thing on here but I’m delighted to be able to offer two pairs of tickets for Knoxville Morning: Celebrate 10 Years of Band On An Island in the Odessa Club on Friday, August 23rd.

To be in with a chance of winning all you have to do is email your name to barrygruff[at]gmail[dot]com with ‘Knoxville Morning Giveaway’ as the subject title. Winners will be selected at random and the competition closes at 3pm, Friday, August 16th. If you still need persuading, here’s a wee bit of spiel about the band.

Under whatever guise, Knoxville Morning or BOAI, they have played a hugely important role in the development of what is now a rather healthy music scene in Newbridge. To be fair, few, if any have done as much for music in the town. So, before Knoxville Morning came Band on an Island. Formed over Campfire sing songs in Newbridge ten years ago, Band on an Island have enjoyed a good decade in Irish music. From the fire of those local campfires, they spread their music to places that even they themselves could never imagine. One of which was America, the birthplace of their beloved Country music, where the beginnings of a new project started to take shape.

A trip across the US left Band on an Island founder and chief songwriter, Ciaran Dwyer with a collection of songs and stories, of a different variety to those of BOAI. Having assembled together the bones of a new album, with the help of his BOAI colleagues and a host of other musicians and friends, they recorded a new record under the new Alias “Knoxville Morning”. The resulting record was great – a sweet blend of folk, country and Americana, with Dwyer’s intuitive storytelling the linchpin that holds everything together. The record was well received elsewhere too and managed to secure a German record deal.

For this night only in August, with the help of many friends, they will dig deep into their extensive catalogue of jams and celebrate Ten Years of friendship and Newbridge Music.

It’s competition time again. There are two pairs of tickets for the Kildare leg of the FMC Tour with Squarehead, The Lost Brothers and We Cut Corners up for grabs. It’s all happening in The Late Lounge, Kill, this Friday, November 9th, with the local support from White McKenzie.

To be in with a chance there are no silly questions, just email your name to barrygruff [at] gmail [dot] com with ‘FMC Tour 2012’ as the subject title. Winners will be drawn at random and the competition closes at 12:00 on, Thursday, November 8th 2012.

It promises to be a really great show with three of the finest acts in Ireland sharing the same bill, all of which have featured quite a bit on the blog. If that’s not enough of a ringing endorsement, there’s plenty of choice cuts from the bands playing below, in case you need further persuasion.

END_OF_DOCUMENT_TOKEN_TO_BE_REPLACED

There are two tickets up for grabs. No silly questions, just email your name to barrygruff [at] gmail [dot] com with ‘Riverbank’ as the subject title. Winners will be drawn at random and the competition closes at 12:00 on October 30th 2012.

The Unusual History of Ether is a songwriting partnership between Rebecca Collins and Danish guitarist Mikkel Ploug. The fruits of this union is fresh, slightly dark but profoundly beautiful indie pop songs, which are sung with passion, performed with grace and recorded quite beautifully. The Unusual History of Ether do, at times, recall the noir-ish, Gothic parts of Anna Calvi’s irresistible self titled debut from last year.

Tickets are €10/€12. Doors at 8pm & support comes from the ever brilliant Sive. Here’s a few choice cuts from the band.

Independent Irish record label Reekus Records take over the reigns for the latest installment of Pod and Heineken Music’s Future Bright, bringing Sweet Jane, Saccade and The Syndicate to the stage.

Dublin’s Sweet Jane return to domestic duties fresh from wooing crowds with their psychedelic rock‘n’roll at SXSW. I caught Sweet Jane’s slot at Oxegen last year and it was rockin’, very enjoyable. It should be a great night, 3 acts for €5 is a winner.

Anyway, we have kindly been given a pair of tickets to giveaway. To be in with a chance to win simply email barrygruff@gmail.com with the subject ‘Future Bright’ before Wednesday noon and a winner will be drawn at random.

I’m absolutely delighted to announce we have 2 copies of Band on an Island’s fantastic 7″ single ‘Back Disco’ up for grabs. The single also features the brand new B-side ‘Chelsea Bards’. BOAI are easily one of the best folk rock bands in Ireland today, having a fantastic ability to deal with dark angry themes often with anti-establishment undertones as well as beautiful songs about the people, places and the town they love.

In keeping with the 1990 World Cup buzz of last week all you have to do is send your full name, postal address and the answer to the question below to barrygruff[at]gmail.com with ‘Back Disco Giveaway’ as the subject title.

Who scored the Rep. of Ireland’s first ever World Cup Goal against England in Cagliari on June 11th 1990?

Entry will be closed @ 5pm on Friday 11th June. Thanks to the lads for sending on the records and Good Luck.

Band on an Island – Back Disco (Featuring Claire Prendergast)